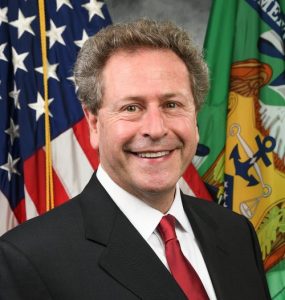 David F. Eisner was sworn in as Assistant Secretary of the Treasury for Management on April 30, 2018

Mr. Eisner is responsible for leading and executing Department-wide operations, including formulation of the Department’s budget and strategic plan. He also oversees data-driven reviews of policy and operational units across the Department and within Treasury’s bureaus. Prior to coming to Treasury, Mr. Eisner was a private investor and the executive chairman of Compliance Science, Inc., a technology company focused on regulation of the financial industry. He founded and served as the chief executive officer of TheMarkets.com LLC, a financial software and data firm, which was sold in 2010. He spent 12 years at the investment bank Jefferies & Company, including six years as executive vice president in the office of the chairman.

Mr. Eisner earned a B.S. in accounting and government from American University and he later served on the Board of Trustees. He earned a J.D. from Boston University School of Law, where he was an editor of the American Journal of Law and Medicine.

He is married to Karen Lehmann-Eisner, and they have two sons, Joshua and Jason.