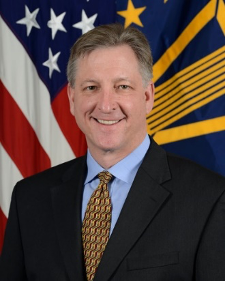 Doug previously served as the Deputy CFO and Assistant Deputy CFO in the Office of the Under Secretary of Defense. He served as principal advisor to the Defense CFO, as well as other senior leaders, on all issues involving financial management reforms.

Formerly, Mr. Glenn was the DCFO at Interior; Finance Director at the NASA; and DCFO at GSA. His proudest career accomplishments include:

A native of San Diego, Mr. Glenn is a former CPA (despite the AICPA losing his exam) and a former CMA. He has coauthored procedures listed in Office of Management and Budget (OMB) Bulletin No. 07-04, “Audit Requirements for Federal Financial Statements,” and portions of the OMB Circular A-123 Implementation Guide. In addition, he co-chaired OMB Circular A-136 committees from 2008 to 2010; served as President of the Washington, D.C. chapter of the Association of Government Accountants (AGA); served as National AGA president 2016 to 2017; and has landed on and been launched off an aircraft carrier at sea (prior to joining the Department of Defense).