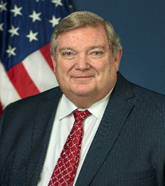 John E. Kramer currently serves as the Chief Financial Officer and Assistant Secretary for Budget and Programs in the Office of the Secretary at the Department of Transportation. John was confirmed by the Senate and sworn in on December 16, 2020. John also was appointed to the Northeast Corridor Commission by Secretary Chao. John comes to the Department of Transportation with extensive experience in both finance and industry.

After graduating from Colgate University cum laude, John started his career with the former Peat, Marwick & Mitchell (now KPMG) accounting firm in New York where he served as senior auditor. While there, he received an M.S. in accounting from the NYU Stern School of Business and qualified as a Certified Public Accountant. After attending Harvard Business School, John joined Philip Morris International where he remained for two decades rising to the rank of Vice President. Later in his career, he founded and/or grew several Tech/Software companies and worked with Private Equity/VC groups to successfully grow, reposition and sell investments in several industries. He also served as Chief Financial Officer for Siva Corporation, Nuvola Systems and more. Most recently, John spent four years at Aerosim Inc. as their Group Chief Financial Officer, where he helped double revenues and set a 5- year record level of earnings in 2016. He also received the Orlando Business Journal’s CFO of the Year Award.

John and his wife, Laurie, have a home in Ocean Ridge, Florida and he has two daughters, Katherine and Kelly.