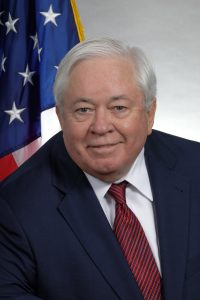 Thomas F. Gilman was nominated by President Donald J. Trump to be the Chief Financial Officer and Assistant Secretary for Administration of the U.S. Department of Commerce. He was confirmed by the U.S. Senate in January 2019.

In that capacity, Mr. Gilman holds a dual role overseeing all financial and management functions for the multi-billion-dollar budget as well as the administrative and personnel functions for its approximately 47,000 employees.

Following the merger, Mr. Gilman joined the Asbury Automotive Group in 2001, where he oversaw their Initial Public Offering on the NYSE in 2002.

Mr. Gilman successfully navigated Chrysler Financial through the TARP government program, ultimately repaying its 1.5-billion-dollar obligation to the Treasury Department with interest and within six months.

Mr. Gilman speaks four languages, has lived in the US, Canada, Mexico, Brazil and the U.S. Virgin Islands, and has conducted business in 21 countries.

He holds a B.S. Degree in Finance from Villanova University.